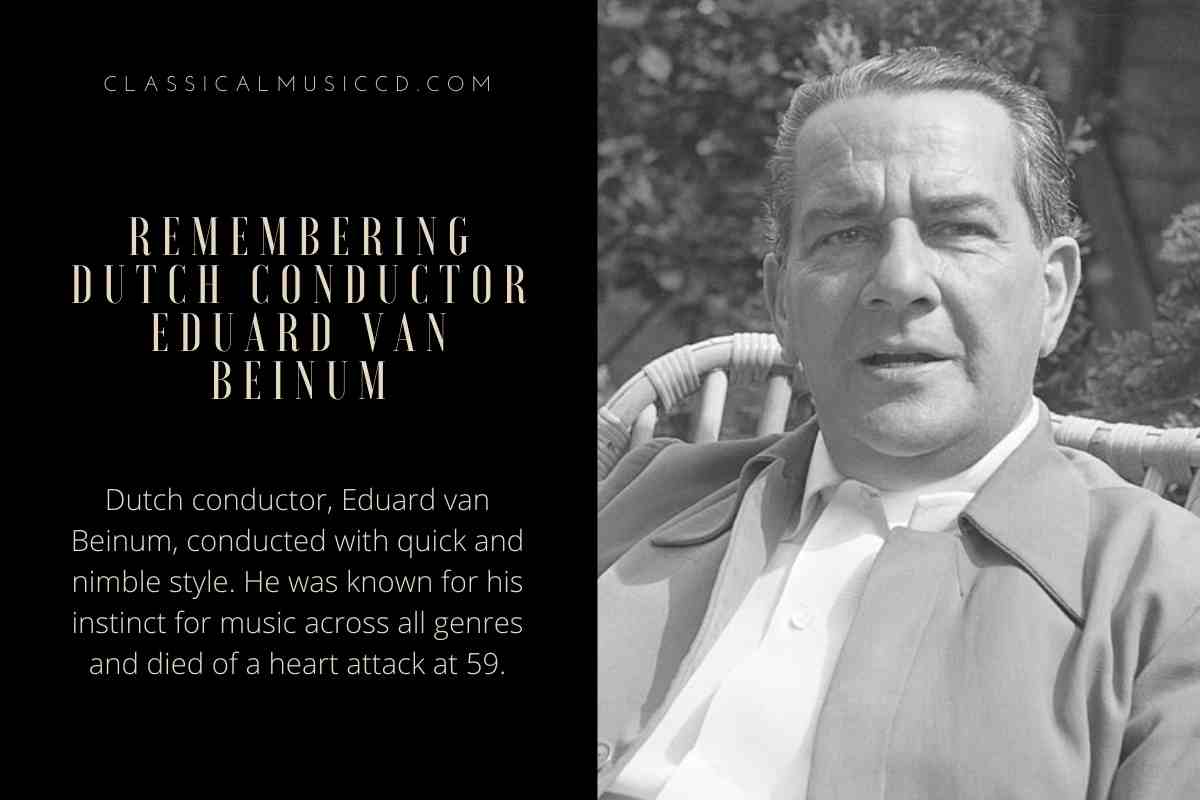 When Eduard van Beinum died suddenly of a heart attack at the age of 59, the music world lost one of its most brilliant conductors. Though he had only been leading the Concertgebouw Orchestra for four years, he was considered one of the greats. His quick and nimble conducting style was highly praised by audiences and musicians alike.

In this article we celebrate the life and music of Eduard van Beinum. We remember his outstanding career, from his early days leading the London Philharmonic Orchestra to his final years with the Concertgebouw Orchestra. We also reflect on the legacy he left behind and how his music continues to inspire audiences today.

On September 3, 1901, Eduard van Beinum was born in Arnhem (the Netherlands). In 1938, he became the Concertgebouw Orchestra’s principal conductor under Willem Mengelberg, who had led the organization for over 30 years.

At 17, he played the viola in the Arnhem Orchestra despite originally being trained as a pianist. He then went on to study music conducting at the Amsterdam Conservatory. At 26, he became conductor of the Orchestral Society and remained in that position for six years.

In 1931 he was recalled to Amsterdam, where he served as an assistant to Willem Mengelberg, who had brought the Concertgebouw international renown. He took over for Mengelberg in 1938 and became the first conductor shortly afterward.

After Mengelberg was forced to retire in 1945, van Beinum took his position as music director of the orchestra. Two years later, he became leader of the London Philharmonic Orchestra.

In 1956, van Beinum was named music director of the Los Angeles Philharmonic. During this time, he helped to solidify the orchestra’s reputation as one of America’s leading orchestras.

In his first season as musical director of the Philharmonic, Dr. Van Beinum conducted eight weeks of concerts in January and February 1957. His second season lasted 12 weeks, running from November 1957 to January 1958.

The concerts were frequently attended by enormous audiences and excitement. Music fans fell in love with him, and his musicians showed great enthusiasm for him. Dr. Van Beinum was given a deafening, 7-minute standing ovation by a crowd of 6,700 spectators after his last concert at Shrine Auditorium on January 31, 1958.

In 1959, van Beinum returned to the Concertgebouw Orchestra. He continued to lead the organization until his death on April 13, 1959.

In contrast to Mengelberg, his style is quicker and more nimble. He was less inclined to enforce discipline, and he preferred performing classics and post-romantics in a more traditional way that included portamento and divided violins—a style the Concertgebouw had developed under Mengelberg for fifty years. Van Beinum’s brisk approach invigorated Mahler and Bruckner symphonies, which are still considered exceptional today.

Van Beinum was known for his quick and nimble conducting style. He was an excellent communicator, and he had a great sense of humor. He was also known for his dedication to music education. He gave numerous lectures and workshops, and he frequently conducted youth orchestras.

Eduard van Beinum conducted orchestras differently than most people in his position. He wasn’t dictatorial like Willem Mengelberg and instead respected his musicians, treating them more as colleagues. His style emphasized that he and the orchestra were making music together–an idea that was succinctly but accurately described by Bart van Beinum, the conductor’s son, when he said it was less about “interpreting” a score and more about “realizing” it.

Eduard van Beinum was a renowned conductor who aimed to connect with the music on a personal level and convey it to listeners in the most direct way possible. He had an incredible instinct for music across all genres and passed away at the height of his career, at just 59 years old. While rehearsing with his beloved Concertgebouw Orchestra Amsterdam, he suffered a heart attack while conducting Johannes Brahms’ First Symphony.

In recognition of his outstanding musicianship and contributions to symphonic interpretation, four European countries conferred special honors and decorations upon him.

Many of the above recordings have been reissued on CD and other formats. They are still considered among the best interpretations of these works. Taking time to properly listen to classical pieces he conducted, Eduard van Beinum was able to produce superior recordings of these great works.

Eduard van Beinum’s conducting style differed from most of his contemporaries in that he respected his musicians and treated them more as colleagues. His style emphasized that he and the orchestra were making music together–an idea that was succinctly but accurately described by Bart van Beinum, the conductor’s son, when he said it was less about “interpreting” a score and more about “realizing” it.

As a result of this approach, van Beinum was able to get exceptional performances out of his orchestras, as evidenced by the numerous highly-regarded recordings he made with the Concertgebouw Orchestra. These recordings are still considered some of the best interpretations of these pieces, and they continue to be enjoyed by classical music lovers around the world.

Eduard van Beinum was a dedicated music educator in both classical and popular music genres, and he frequently gave lectures and workshops on conducting and symphonic interpretation. He also conducted numerous youth orchestras, instilling in them a love and appreciation for music.

You can find his complete discography here.

Eduard van Beinum was an excellent conductor and a great man. He was known for his quick and nimble conducting style, and he was an excellent communicator. He had a great sense of humor, and he was also known for his dedication to music education. He gave numerous lectures and workshops, and he frequently conducted youth orchestras. If you have never heard of him, I highly recommend checking out his recordings. They are still some of the best interpretations of these works. Thank you for reading!